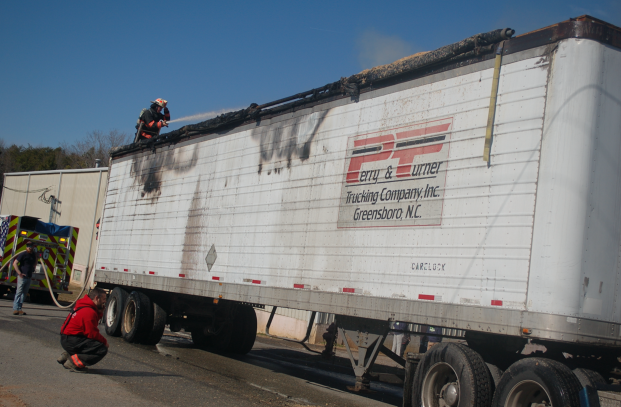 By Italia Gregory and Brian Klingenfus

According to Drakes Branch Fire Chief Kenny Tharpe “a container (on a tractor trailer filled with sawdust) was being loaded and fire was in (the) container.”

The container belonged to Perry and Turner Trucking Company Inc., based out of Greensboro, N.C.

Tharpe said he wasn’t sure was ignited the fire.

Volunteer fire department members from Keysville, Drakes Branch, Charlotte Court House and Meherrin responded to the scene. Bacon District was turned around and Hampden Sydney and Farmville’s ladder trucks were also called to the scene but dismissed after they arrived.

Keysville Fire Chief Lynn Duffey said volunteers were able to put the blaze out within 15 minutes.

“This call was handled in a quick manner to reduce loss; it was handled very quickly,” Duffey said. “I can’t help but brag on them, my men do a wonderful job.”

Genesis is located at 8818 Church St. in Keysville.

The company manufactures in wood and laminate products. According to the company’s website, the plant in Keysville specializes in bed and drawer parts.

The plant is the only Virginia based facility operated by Genesis. The company operates other plants in Indiana.

No track championships at SBS