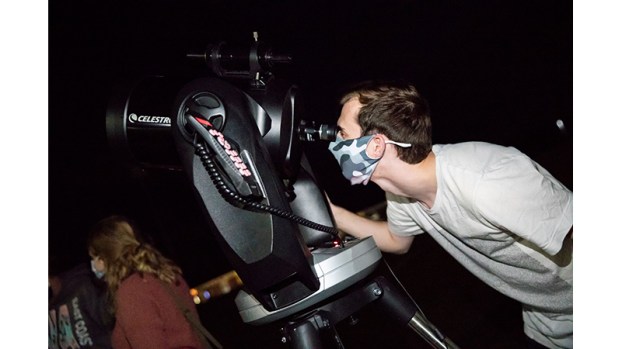 Event leaves students with stars in their eyes

The clouds moving across the sky at times decreased visibility, but they did nothing to dampen the enthusiasm of the Longwood University students who turned out recently for an evening of stargazing.

“Even with the clouds rolling in, we were still able to view the moon, Mars, Saturn and its rings, as well as Jupiter and its four inner moons: Io, Europa, Ganymede and Callisto,” senior physics major Austin Hedges said, who is president of the Society of Physics Students (SPS), which co-sponsored the event with the Outdoor Club.

Giving participants that close-up view of “outer space” was an eight-inch telescope equipped with a GPS system programmed with the locations of thousands of celestial objects.

Leah Eick, a sophomore nursing major and Outdoor Club media and equipment chair, got an eyeful thanks to the sophisticated equipment.

“I’m fascinated by the planets,” she said. “Just being able to look at something so far away and see the beauty of it is amazing.”

Kenneth Pestka II, a physics professor and the SPS faculty advisor, said students received training and practiced using the telescope before taking it to the event.

“Once the operator has correctly aligned the telescope, it can accurately track objects, and it can also find celestial objects for the user,” he said.

The Society of Physics Students and the Outdoor Club are just two of Longwood’s more than 175 student organizations. With adaptations for COVID-19 guidelines in place, these organizations are providing students with opportunities to get together to do things they love and make new friends.

Outdoor Club President Crystal Rosenbaum, a senior nursing major, said her group has been “jam-packed with activities” this fall, including weekly bike rides, outdoor yoga classes and a sunset hike on the High Bridge Trail attended by 25 students.

The stargazing event is another facet of the club’s mission to “get students interested in the outdoors and to continue that interest past their college years,” she said.

The event put Ashley Roberts, a senior sociology major and Outdoor Club member, in mind of camping trips with her dad where they would lie on their backs and look up at the stars.

Daniel Alvarez, a sophomore English education major and treasurer of the Outdoor Club, is a nature lover who spends a lot of time at his home in rural northern Virginia down at the creek fishing and exploring the woods with his dog. He had a telescope when he was a kid, but it was nothing like the one the physics students set up for the stargazing activity.

“It’s nice to be able to look through a telescope that lets you see so much detail,” he said.

That’s just the reaction Hedges was hoping for.

“I think the participants really enjoyed being able to get great views of these objects,” he said. “Especially with Mars, Saturn and Jupiter, because with the naked eye, they are just small dots in the sky. With the telescope, we could clearly see the red color of Mars, the beautiful rings of Saturn and the bands across Jupiter’s atmosphere.”

The event was such a hit that the two clubs are planning to do it again in the near future — hopefully when the weather will be more cooperative.

“Outer space is so vastly unknown to society as a whole,” Rianne Woudsma, a sophomore physics major and the SPS vice president, said. “I’m hoping we can get more people interested in what’s out there with these events.”