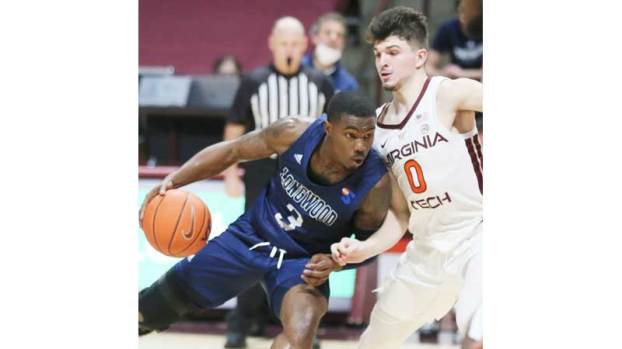 After a last-minute, two-point home loss to The Citadel on Saturday, Dec. 19, Longwood University’s men’s basketball team had to recover to take on a nationally ranked foe in Blacksburg two days later.

Even with the long-awaited return of two of their top guards, the Lancers couldn’t stop red-hot Virginia Tech.

Riding 18 points from sophomore guard Jalen Cone, 14 points from 6-foot-8-inch, 235-pound forward Keve Aluma and 45 points from its bench, outsized Virginia Tech shook off multiple Lancer comeback bids with a series of scoring bursts en route to their third 80-point game of the season. The last of those runs was a 24-7 surge midway through the second half that turned a five-point lead to double digits and put to bed the upset-minded Lancers’ final shot at a revival.

“I told them I was actually really proud of how they battled,” Longwood Head Coach Griff Aldrich said. “To go down 14 in the first half, I thought they showed some real toughness to fight back, to continue to claw, and to put themselves in a competitive situation there at the end of the first half. I’m really proud of that.”

The game did provide Longwood (1-7) two early holiday gifts in the form of veteran guards Heru Bligen and DeShaun Wade, who both suited up in the same game for the first time all season. Sidelined by injuries through the first six games of the season, both Bligen and Wade played 20-plus minutes apiece and provided welcome reinforcements for Lancer point guards Justin Hill and Juan Munoz, who entered the game both averaging more than 30 minutes per game.

With the closest version of a full Longwood lineup Aldrich has had at his disposal this season, the Lancers twice whittled double-digit deficits to two possessions. The first of those bounceback bids took place at the end of the first half when a 7-0 run to the buzzer cut Virginia Tech’s lead to 34-30. The second bid came midway through the second half when a 10-2 surge turned the Hokies’ 13-point lead to five with 11 minutes, 30 seconds to play.

However, even the return of Bligen and Wade was not enough for Longwood to keep pace with Virginia Tech (7-1) for a full 40 minutes. The Hokies capitalized on even the slightest of opportunities, turning 15 Longwood turnovers into 15 points and 14 offensive rebounds into 21 second-chance points.

Aluma and Tyrece Radford created several of those extra scoring chances, with Aluma contributing defensively with three blocks and two steals, and Radford chipping in four offensive rebounds as part of a near-double-double of nine points and eight boards.

“Against Virginia Tech, the margin for error is so slim,” Aldrich said. “You make a mistake, and they make you pay. You think about a bunch of our tough layups we took, we missed the layup. The problem is if you miss the shot, maybe it’s not a great shot and it feels disappointing — but tonight that actually turned into a fast break on the other end.”

For Longwood, junior forward Zac Watson finished with eight points, sinking 4-of-6 field goals, including a pair of dunks. Fellow forward Leslie Nkereuwem added a team-high 10 points for his second straight double-digit scoring effort, while Bligen, a sophomore, and freshman Jesper Granlund matched Watson with eight. Wade, a junior, finished with seven points in only his second game back in the lineup.

On Saturday, the Lancers learned another hard lesson by experience.

Buoyed by a double-double from redshirt junior forward Hayden Brown and a combined 35 points from starting guards Fletcher Abee and Kaiden Rice, The Citadel took charge in the game’s final minute and dealt Longwood a heart-rending 91-89 defeat Saturday afternoon in Willett Hall.

In a matchup that was back-and-forth throughout, the Lancers led in the final minute after Wade’s six consecutive points gave them an 89-86 advantage. However, the Bulldogs responded with a 5-0 run of their own and reclaimed the lead for good on Abee’s go-ahead three-pointer with 52 seconds to play.

Abee’s trey was the last of nine lead changes that occurred in the game’s final 5:31, but it was the final one the Bulldogs (6-0) needed to keep intact their unbeaten start to the 2020-21 season.

“Basketball is a game of runs,” Aldrich said. “They went on runs, we went on runs. Unfortunately we didn’t have enough in the tank there at the end to hold them.”

With a veteran lineup spearheaded by the redshirt junior Brown, senior Rice and graduate point guard Tyler Moffe, The Citadel’s experience came through in the final minute with back-to-back defensive stops after Abee’s go-ahead triple. Longwood got a player in the paint in each of their final two possessions, but two true freshmen came up empty both times as Granlund’s layup fell short at the 35-second mark, and Hill’s buzzer-beating coast-to-coast drive ended with his contested jumper hitting just off the side of the rim.

The loss was the Lancers’ third straight in which they were within one possession in the game’s final minute, following similarly narrow back-to-back defeats of 67-66 and 62-53 against perennial Big South Conference power Radford University on Monday, Dec. 14, and Tuesday, Dec. 15.

“This team’s going to be a good team, but we have to learn the lesson,” Aldrich said. “And the lesson will continue to be taught to us until we sit down and embrace it.”

Juxtaposing The Citadel’s experience was Longwood’s youth, as the Lancers once again rolled out a starting lineup that featured the true freshman duo of Granlund and Hill and a bench including five first- or second-year players.

Despite their inexperience, Longwood’s 12-man rotation overcame a sluggish opening half to battle back from an eight-point deficit with a season-high 51 points after halftime. However, The Citadel’s first-half cushion — built largely by the literal and figurative strength of Brown, who finished with a game-high 26 points and 10 rebounds — proved too much to overcome.

Brown’s production helped the Bulldogs overcome a career-high 18 points from Hill and a career-high 20 from Nkereuwem, who finished 9-of-11 from the floor. Wade — in his 2020-21 debut after missing the first six games with an injury — also scored 14 points, and Munoz, a redshirt junior, added 13.

The Lancer’s loss to Virginia Tech on Monday signaled the end of the non-conference portion of their 2020-21 schedule and sent them into a nine-day break for the holidays. Upon their return, they will face the remaining portion of their Big South gauntlet, which begins with a two-day home doubleheader against University of North Carolina Asheville on Dec. 30-31.

Last season, Longwood collected its most Big South wins since joining the league in the 2012-13 season, finishing 9-9 to place fourth.

High Bridge to close for 3 months

Supervisor will not apologize

WFLO radio stations to be sold

First baby of the New Year