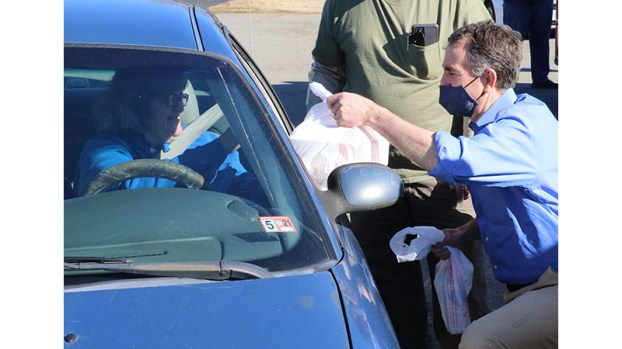 Gov. Ralph Northam spent some time handing out meals to those without power and in need Tuesday afternoon, Feb. 23, in front of the Charlotte Court House Town Office.

Northam made several stops in Charlotte County Tuesday, including at the town office where disaster relief volunteers were headquartered from American Red Cross Disaster Relief and Southern Baptist Convention (SBC) Disaster Relief. Northam was in the area to tour Archlynn Farm but also surveyed some of the relief efforts put in place for county residents following the Valentine’s weekend ice storm that caused widespread power outages in the area.

Lindsay Webb, a local volunteer, explained Tuesday that SBC Disaster Relief is the third-largest resource in the country for emergency management.

“They always go with the Red Cross, so the Red Cross provides the food, Southern Baptists cook it,” she said.

The representatives of both groups working in Charlotte County are volunteers.

“They’re all sleeping on the floor in the town office,” Webb said, noting they arrived Friday and have been cooking since Saturday.

“They’ve done 2,000 meals each day, and they’re going to do about 2,700 tomorrow because we’ve included the schools tomorrow, and they’re going to send it home with the kids.” Meals have been going out every day to Nottoway County, Lunenburg County, the edge of Prince Edward County and all over Charlotte County.