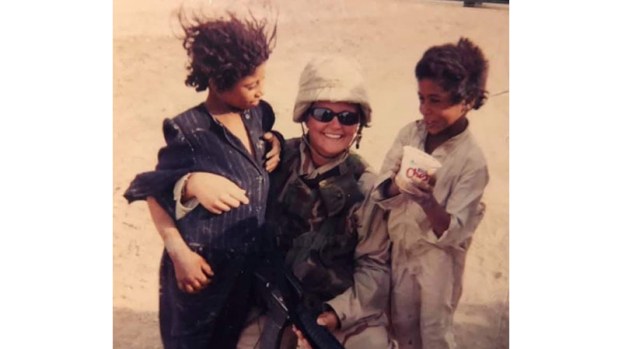 Amanda Redmond spent 18-months in Iraq on deployment with the Army National Guard.

Having served in the military for close to 22 years and still active, Amanda Mills Redmond of Keysville says she couldn’t see herself doing anything else.

“This is what I was born to do,” Redmond said. “This is what I’m passionate about, serving my country, my community and giving back to what has given me so much, my freedom. The freedom to worship God and to live as I choose.”

Currently, Redmond is an E7 sergeant first class stationed in Winchester with the third battalion, 116th infantry. She is the battalion, S4, and manages six supply sergeants and six companies within the battalion.

Labeling herself as a “daddy’s girl,” Redmond says she wanted to follow in her dad’s footsteps.

“My Daddy has served in the army, was an MP, and served in Vietnam,” Redmond said. “I have always been a Daddy’s girl and realized I wanted to follow in his footsteps.”

Redmond joined the Army National Guard in 1998 when she was still in high school at Randolph Henry.

“I was 17 years old at the time and had to have my parents’ consent,” she said.

Redmond left for basic training in January of 1999, headed to Fort Jackson, South Carolina, and completed her AIT job training at Fort Lee in Petersburg directly after basic training.

When Redmond joined the military, she started out as a 92A automated logistics supply specialist. She also holds the MOS of 92G, which is a food service technician.

“That’s a fancy term for a cook,” Redmond said. “I went to cooking school so I could get promoted quicker; this is how I earned my E5 sergeant rank. I worked in

warehouse operations as a full time federal technician from Aug. 1999 until around 2007, when I was hired as full time active Guard reserve.”

In 2007, Redmond began at Virginia Medical Command and moved from there to the Maneuver Training Center and handled logistics for the Installation at Fort Pickett Blackstone.

“I managed close to a billion dollars in assets there,” Redmond said. “From there, I took a break from logistics and tried my hand at recruiting for two years. I loved recruiting. I was successful at it. I’m a people person, could talk to anyone, and have been told I could sell an ice cube to an Eskimo. In the 20 months I was recruiting, I had 22 people put into the Virginia Army National Guard. I would still be recruiting if I had not been selected off of the promotion list.”

Currently, Redmond’s job is to ensure the logistics of the unit are taken care of.

“I make sure everyone gets their beans and bullets,” she said. “I ensure soldiers are fed, clothed and have a place to sleep.”

At 22, Redmond married her husband, James. Just one year later she received orders to deploy for 18-months in Iraq on Dec 7, 2003.

“D-Day, as my mama called it when I told her the date,” Redmond said. “I’ll never forget telling my family that I was leaving. It was one of the hardest things I’ve ever done. My Mama and Daddy didn’t handle it very well, their baby girl leaving with the uncertainty of where I was going, when, or even if I would make it back home. That was the start of the war in Iraq, and there was a lot of activity going on. It was scary for all of us, and through God’s grace, I made it back home in April 2005.”

Redmond said that an 18-month deployment away from her family was definitely the biggest challenge of her career.

“This was before I had children, and I’m so thankful for that,” she said. “It was hard enough leaving my family and my seven nieces and nephews whom I was really close to. Being away from family for that amount of time made me appreciate my family that much more. It made me appreciate life. The biggest lesson I’ve learned was in that deployment, to never take life for granted. It can all be gone in the blink of an eye.”

Redmond said during that deployment and the years following she had some near-death experiences and lost several brothers and sisters in uniform.

“I’ve had experiences that I relive over and over in my mind; they haunt my dreams, wondering what I could have done differently,” she said, “How could I have saved this soldier, how could I talk this one out of suicide? The answer is always the same, nothing. Though I still mourn for these soldiers, these brothers and sisters, I thank God every day for allowing me to make it back home to my family and the ones I love. It’s God I owe all the glory to.”

Though Redmond is stationed in Winchester, her husband, James, and their three daughters, Chloie, age 9, Maycie, 11 and Lizzie, 14, make their home in Keysville. Even though being stationed four hours away, the solider still remains a full-time mom to her children.

“Though the situation is not ideal, we still manage to get done what we need to,” Redmond said. “My girls are honor roll students, so we must be doing something right. It’s tough on them not having Mommy there every night. I still spoil my girls and try to sing to them at night and say our prayers together, and I never turn down the opportunity for long cuddles when I’m home … freedom definitely isn’t free. Freedom comes with a price. To some, this price is merely their time, time away from family and loved ones, though time is something we can never get back once given. To others, it’s the ultimate sacrifice, their life.”

To see the full Salute to Veterans edition click here.