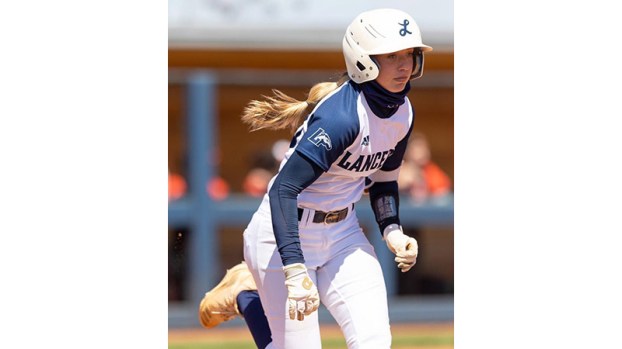 Kasey Carr drove in a run with an RBI single. (Photo by Mike Kropf/LU)

After Longwood swept both games of Friday’s doubleheader 2-0 and 9-6, UNCG blocked a three-game series sweep with a 10-3 win in the Saturday afternoon finale at the UNCG softball stadium.

Anchoring the bounce back win for the Southern Conference preseason favorite Spartans (18-12, 3-3) was right-handed ace Morgan Scott (9-6), who scattered three hits and three runs in her second complete game of the series.

The loss prevented Longwood (17-19, 6-3) from locking up what would have been its fifth series sweep of the season but still sent the Lancers back to Farmville with their fifth series win.

Scott, who took a hard-luck 2-0 loss in Friday’s series-opening pitcher’s duel with Lancer ace Sydney Backstrom, got plenty of run support the second time around as UNCG turned seven hits into eight runs. Melanie Darges led that charge from the bottom of the lineup, going 3-for-3 with a triple, two runs and an RBI out of the nine-spot against a Lancer pitching staff that opted to sit Backstrom with a crucial Big South series against Radford coming up this Tuesday and Wednesday.

UNCG’s offense took advantage of the Big South wins leader’s absence, getting RBI from five different players, including one each from the 1-2-3 trio of Jasmine Palmer, Makenna Matthjis and Maycin Brown, and two more on a two-run homer by Jordan Gontram.

Meanwhile, Longwood’s runs came via small ball, as Madison Blair executed a squeeze bunt in the first inning, Kasey Carr drove in another with an RBI single, and Sydney Jacobsen capped the Lancers› scoring with a sacrifice fly in the fifth.

That was all the Lancers could muster against Scott, who finished with seven strikeouts and just two walks in her 11th complete game of the season. The 5-9 right-hander dropped her ERA to 2.47 with the performance, which remains the second lowest in the Southern Conference.

“There are no easy losses, and there are no perfect wins,” Longwood head coach Dr. Megan Brown. “Softball is a mix of the two, a constant battle to adjust, grow and learn. Today we did all three.”